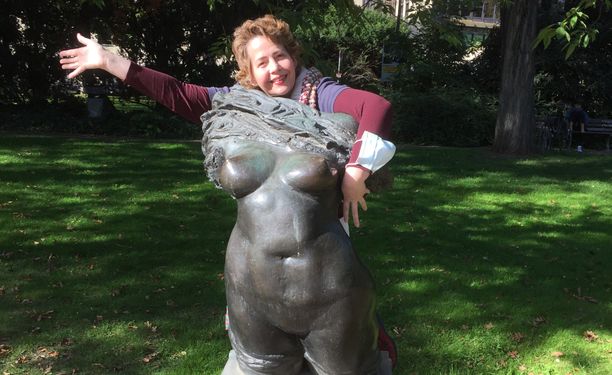 In the picture above, you see me posing with a bronze statue of a woman’s torso. Its title is straight-up: “Torso.” No frills there. As a woman who’s had a mastectomy, it strikes me that it isn’t unusual to see statues of women without heads, without arms, without legs. So I posed with her. I let her borrow my head and arms, and she gave me her two perfect breasts.

I doubt very much that this was the artist’s intention, but it was a lot of fun for me. There are a slew of pictures of me with this torso statue. I enjoyed pretending that she, a work of art, and I were sharing our body parts. Pygmalion with a twist, a major twist.

Then my knees started to get sore from getting up onto the pedestal with her and it was time for us to part ways. I tell you what, I think I got the better deal.

As a woman who recently kicked cancer (still in antibody treatment stage), there is one question I’m asked the most.

Why have you chosen to not get a boob job?

Lots of reasons, actually. I strongly suspect that if people really knew what’s involved, and what the results would actually be, they’d probably say, “Well surely, you’re not going to get your breast rebuilt, are you?” Because the process is really painful and lengthy and the results, even the best possible results, are not that great.

One of the – I think – most common misconceptions about a mastectomy is that it’s like plastic surgery. A lot of my friends were under the impression that getting a mastectomy was akin to getting a free boob job, and that the rebuilding of my breast would happen during the same surgery. But that isn’t what happens.

There is absolutely no shame in having a misconception about something and breast surgery is no different. Before I got breast cancer, I knew almost nothing about it!

Most people understand that the mastectomy is really hard. And it is. It’s an amputation, which is physically painful all by itself, but it’s also the removal of a clear and significant symbol of my being a woman, so there’s this emotional aspect of having a breast taken away.

The mastectomy requires being put under. Afterwards, you wear a tourniquet and have tubes for drainage coming out of you, and an IV drip for pain. It does require one to two weeks in the hospital, and while the external scar heals in a manner of weeks (about six for me), it takes several months for the internal tissues to heal (eight months, usually more).

I have to say, being put under was for me very frightening. I didn’t know if I’d ever wake up again. So it was very present in my mind that going to the hospital to have my breast removed might be the last thing I ever did. Once I just resigned myself to that possibility, it was actually easier for me to be calm. I was on the slab, being wheeled towards the bright lights, thinking, “This might be it.” Then the drugs kicked in and I was under.

If you’ve seen The Matrix, it’s much like when the mirror is running up his arm. I felt like something was sliding up my arm, to my brain and I was instinctively responding just as Neo does. I stretched my arm out and pulled my head back, trying to keep my brain away from it. The last thing I heard was one of the male nurses say (in German), “No, don’t fight it, just-.” That was it.

When I woke up, my doctor was behind my head, pushing my bed through a hallway, jostling my shoulder. “Wake up, now. It’s time to wake up.” I did not remember any dreams, but I did sense a passage of time. I felt the lost time, just as if I had been napping.

The recovery from surgery is no small feat. It’s quite painful and once you’re strong enough, it does require physical therapy so that you don’t develop other, new problems, like a hunchback or an atrophied arm, or limited movement that becomes permanent.

One of the surgeries requires that part of your body is removed, so they can use that as material for your breast. Most often, they take part of the ass. Because I’m large breasted, it means my ass would have a large dent in it, a permanent one, and by the way – that Ass Dent is something that makes sitting uncomfortable for many women who get this surgery, and that pain lasts for the rest of their lives.

I’m a writer and I doodle. Sitting is my THING. If I can’t sit and write, or sit and draw, I’m in serious trouble. I also sit and think, sit and eat, sit and talk, etc. I sit. I need to be able to do that without pain, without discomfort. I do not want to go through physical therapy just so I can sit and not need drugs to do it.

All that for a lump of flesh that will not look the same as a real breast, will not hang the same and it will not feel the same. It will be numb, with no sensation whatsoever. Not ever.

My feeling here is that I need a fake breast about as much as I need a hole in my head. (Old American Saying, that one.) Maybe even less than, really, because I could use a little ventilation sometimes. Ahem.

How Passersby Respond to My ONE Breast

I have only one breast. I’m not afraid to show that. I don’t have a prosthetic breast either, because I feel silly with one, like a little girl padding her bra. Most of the time, people don’t even notice.

Truly, people do not see that I have only one breast, most of the time. I have a size E cup. That isn’t small.

When they do notice, it’s a very interesting thing for me to witness. The process of first observing and then coming to understand what they’re seeing is something I can read in their faces. They first glance and then – they take a second look, What did I just see there?

Then they realize that I have just one breast, and after another second or two they realize I must have had a mastectomy.

Then they realize that a mastectomy means I had breast cancer.

And then they look at my face again. They then see that my hair is super short, not quite long enough to have bangs, and they register that, and they see, truly, that I have recently gone through cancer treatment and that I am a cancer survivor.

And then they smile.

And because I can see that thought process, what’s really clear to me is that – my NOT hiding my amputation is actually a good thing. We talk about breast cancer awareness and wear pink ribbons, but people aren’t aware, really. As I say, I was hugely ignorant before having my own experience with cancer.

I think a huge contributor of that is that too many of us choose to hide what we experience. Not just cancer or breast cancer, but just any negative or difficult life experience.

Choosing to not have reconstructive surgery wasn’t something that came quickly or easily to me. Many doctors have asked me, “So when will you begin reconstructive surgery?” Not IF, but when. I think that’s significant, because the way we talk about a thing is a direct reflection of how we think about it. It’s part of us.

What My Husband Says

It was my husband who reminded me that the Amazon Warriors would cut off a breast in order to be better archers.

That idea appeals to me!

I’ve always wanted to learn archery. So as soon as I’m strong enough, I’m going to take that up. When I explained this to one of my psychologists, he said, “But you could learn archery with two breasts.” I wanted to kick him.

What My Gynecologist Says

There’s only been one doctor who was actually relieved when I told her I wasn’t going to do it. My gynecologist.

When I told her my decision, she was downright joyous about it. She told me that she sees SO many women get it done and really, really regret it. It was her strong recommendation that I NOT do it.

She also said that especially for any woman over fifty, which is of course most common as far as breast cancer patients go, the surgery leads to lifelong pain. Every time they sit. This really got my attention.

But of course most people don’t know about all this because – really, where are all the one-breasted women? Where are they? We know that breast cancer is common. But where are all the women who have had a breast or both breasts amputated? They’re missing, vanished from our sight. Made invisible.

What My Friend Celeste Says

“Be kind to yourself.” These are words a dear friend of mine, Celeste Bradley, told me when my chemotherapy treatments began, and she continues to ding that bell for me whenever I need a reminder. It really helps me to keep this in mind, that I need to be patient and that I need to be kind to myself.

There can be a lot of healing in simply sharing our personal stories with each other. We are, after all, very social animals. Talking is how we relate and build relationships. 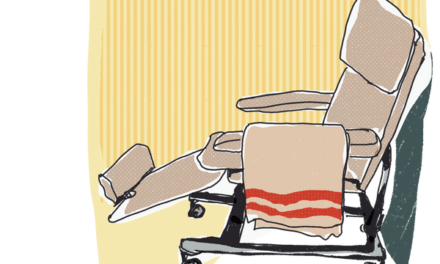 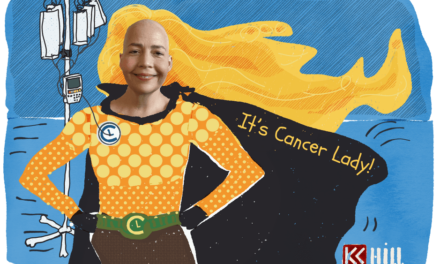 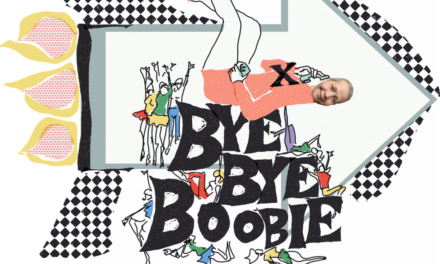 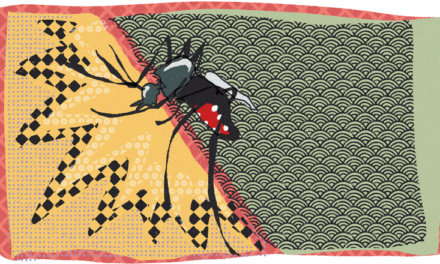